In the Water. Out of School - TH!NK ABOUT IT 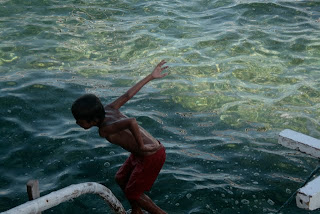 In the Water. Out of School - TH!NK ABOUT IT


(text and photos by the author)

CEBU, Philippines – He stood on the edge of a white wooden plank at the tip of the outrigger canoe docked beside a floating restaurant here in Orango island, in the southern Philippines.

It is high noon and scorching hot. Like studs of diamonds, the yellow sun glistened on the vastness of the emerald green waters.

Wearing only a tattered navy blue shorts and with his back facing the unknown, Steve Abenido whisked his 10-year old bony frame to a perfect roundabout somersault. Time stopped as he broke through the water like a sword that pierced through a huge glass.

I stood with bated breath, watching him come out from underworld. In a split second, I saw his sun-baked hair and his dark shoulders as he resurfaced. In his hand, shining like gold is a five peso coin (USD11 cents), as shiny as his victorious smile as he caught the coin just before it sank deeper into the water.

He climbed back to the motorized banca, greeted by cheers of four other children who have been taking turns diving into the water.

Steve and his friends are among hundreds of sea children scattered around the different islands in the province, which in recent years, has become a major tourist hub for Europeans and lately, for the growing Korean invasion in the Philippines.

Delighted by the sight of children showing off their driving skills, the foreigners gamely throw the coins into the water.

It is lunchtime and in this floating restaurant, tourists are feasting on a wide array of seafoods – grilled lobsters, smoked fish and prawns.

Most guests stop by the different floating restaurants after a morning of island-hopping. They go back to their posh hotels -- where an overnight stay can cost 17,000 pesos or USD375 -- before the sun fades away into the horizon.

Risking their lives, the sea children get a slice of the tourism industry to earn extra money to help their parents earn a living. They are unmindful of the dangers of diving because they know that their parents need all the help they can get.

“Everything I get, I give to my mama,” Steve says. Steve is the third child in a family of eight. He says that when classes start on June 15, he would still have to dive on weekends so he can have money for allowance and that he can continue helping his mother who does not have a job. His diving prowess, he says, he learned from his father who works as a boatman.

Steve is luckier compared to his friends because he is able to go to school. His other friends, on the other hand, would have to continue diving because they’re the only extra hands their parents need to earn a living.Their parents cannot afford to send them to school.

Michael Obando, 11 years old, is one such kid.

On good days, when there are a lot of "guests" as the locals call the tourists, Michael gets 100 pesos (USD2) but on ordinary days, he gets twenty pesos or USD44 cents for two to three hours of waiting around the many floating restaurants in the island.

These coins almost mean nothing for the tourists. In these floating restaurants, a single order of a dish as exotic as grilled buttered lobster costs 1,500 pesos or USD33.

What the sea children get are just crumbs of the pie but they take it. They have no choice because in the Philippines, poverty remains rampant. And this reality is more prevalent in remote villages and far-away islands.

In this particular province, children whose parents can’t afford to send them to school have no choice but to work in the sea. This, needless to say, is tantamount to child labor although technically, these sea children are not employed by companies.

According to an article published by online content provider Article Alley in October 2008, poverty is the main reason why children under the age of 18 are compelled to work in dangerous and life threatening conditions.

It said that the between the ages of 5 and 7 years, one in every six children has to work to earn a living and help support his or her family.

“In the Philippines there are about 2.06 million children who are forced to work in rock quarries, farms, industries, mines and on fishing boats. The consequences of Child Labor on an underage child can be numerous and crippling on his or her physical, mental and emotional state. It can seriously hamper the well being of a child who is supposed to get a sound education and nutrition to develop into a healthy adult,” the article noted.

Ultimately, this shows just a glimpse of why the Philippines is unlikely to meet Millennium Development Goal 2: To Achieve Universal Primary Education.

According to the government’s progress report on the MDG, which I cited in a previous post, the country is unlikely to improve the net enrollment in primary education to 100 percent by 2015 because as of end-2008, it stood at only 85.1 percent.

The proportion of pupils starting grade 1 who reach grade six is only at 75.4 percent of the schooling population as of end-2008 as against the goal of bringing this to 100 percent by 2015. The reason behind this stark reality is poverty, the government said. In the Philippines, 32.9 percent of the population is living below poverty line.

The government is racing against time to improve the situation.

As this is happening, Steve and his friends, like many Filipino sea children scattered all over the country, have no choice but to race against one another, down into the deep blue sea, for a coin or two.


photo by the author
Posted by Iris Cecilia Gonzales at 1:58 PM