My latest story for Womensenews 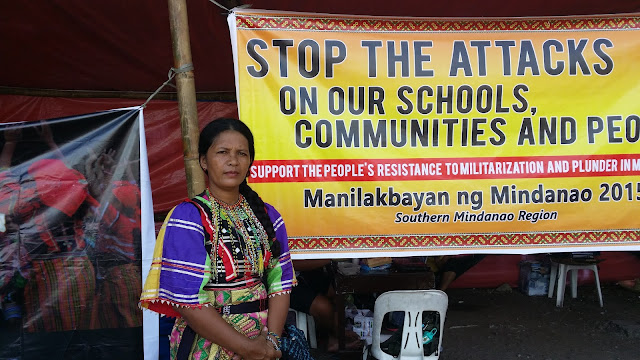 They woke up to the smell of gasoline poured on the canvas roofs of their tents at an evacuation center on the grounds of a church, the complaint says.

"Immediately after, the tents were set aflame when a lighted torch was thrown in," reads the complaint, which was sent to a U.N. official as well as members of the press. "Five makeshift houses were already consumed by fire when it was put out."

Dormitories near the camp were also burned, according to the complaint.
The attack occurred on the compound of the United Church of Christ in the Philippines, or UCCP, in Davao City in the southern province of Davao. Those under attack were over 500 indigenous people from the south of the country, known locally as Lumads.

Five people were hurt, including two children who suffered burns when the canvas roofs melted and fell on their feet.

Now Karapatan, a Manila-based umbrella organization of human rights groups, is waiting to hear back from Chaloka Beyani, U.N. special rapporteur on the rights of internally displaced persons. They submitted the complaint to Beyani at the 31st Session of the U.N. Human Rights Council in Switzerland, which opened Feb. 29 and runs through March 24.

While the focus of the complaint is on the burning of the encampment, advocates are also looking for help with the deeper problem of the Lumads' displacement pressures.

Legal advocates are lodging this particular complaint, but the Lumad themselves have been doing everything possible to protest on their own behalf.

Late last year about 700 Lumads left their mostly thatched huts and makeshift homes in villages in different parts of Mindanao to travel on foot, by bus and ferry to a camping ground inside the University of the Philippines campus in Quezon City, a two-hour drive outside Manila.

Many were mothers who left their children to join the month-long protest.

One is Minda "Dindin" Dalinan, 36, from the Blaan indigenous tribe. She is a mother to eight children, ages 1 to 17. Dalinan left her children under the care of her husband and relatives. She didn't want to leave them but she knew that joining the protest was something she had to do to try to give them a peaceful life.

"In 2004, the military killed my father. My father is a member of the tribal council in our community. He was stubborn. He did not want to give up our ancestral land so armed men killed him. I just want the killings to stop. My dream is to see an end to human rights violations," Dalinan said.

She comes from the poor farming village of Bacong, Tulunan in North Cotabato in Mindanao, the second of the three island groups of the Philippines in the southernmost part of the country. She is a full-time housewife, taking care of the children while her husband ekes out a living as a farmer.

She spoke with Women's eNews last November inside the Baclaran Church, a popular 1932 Roman Catholic Church in the Philippines.

"Why would a mother like me leave her eight children?" she said. "It's because the human rights violations in our community are so rampant. I have to join this protest. It's too much."

Protesters called their trip "the Manilakbayan," a play on the words Manila, the Philippine capital, and "lakbayan," the Filipino word for journey.

The displaced evacuees at the center of the current U.N. complaint came mostly from remote communities in Davao del Norte and Bukidnon, both in Mindanao.

They said they were forced to flee because of operations of paramilitary groups in their communities.

Mindanao is considered the food basket of the country, with more than 700,000 hectares of land in the region covered by banana, pineapple, oil palm, rubber and other plantations.

Ten of the poorest of the country's 81 provinces are on the island.

By plane, the distance from Manila is more than 500 miles, or up to two hours away, depending on the province.

More than 500,000 hectares of land in Mindanao, or 12 percent of the region's land, are also covered by various mining concessions, according to industry data. The region ranks fourth in copper, third in gold, fifth in nickel and sixth in chromite deposits in the world.

Indigenous people say they are a business obstacle that mining concerns are leaving up to paramilitary groups, with possible help from the military, to remove.

Months before the Manilakbayan, the different indigenous tribes of Mindanao suffered a series of direct attacks, killings and harassment. The abuses were concentrated in three provinces--Bukidnon, Davao del Norte and Surigao del Sur–that host private Lumad schools that are regulated by the government.

Among the series of incidents against the Lumad, one of the most highly condemned was the displacement on Sept. 1 last year of at least 2,000 residents from the village of Diatagon in Lianga, Surigao del Sur.

Another was the killing of Emerico Samarca, executive director of the Alternative Learning Center for Agricultural and Livelihood Development (Alcadev). He was found inside a classroom hogtied, with a stab wound and his throat slit open.

The armed men then killed indigenous community leader Dionel Campos and his cousin Juvello Sinzo, who have campaigning for the protection of ancestral lands, said Josephine Pagalan, 37, a Lumad mother from the village belonging to the Manobo tribe.

"I was there, I saw them kill Dionel Campos and Juvello Sinzo," said Pagalan.

The murder has not been solved and the military has denied any involvement in the attacks, saying that the armed group did not belong to the Armed Forces of the Philippines.

The incidents have drawn international attention.
On Feb. 12, 62-year-old American playwright and feminist Eve Ensler, author of "The Vagina Monologues," visited the Lumads in the Davao evacuation camp.

She was moved to tears upon hearing of the plight of the Lumads, according to Bulatlat.com, an online news site, which covered her visit.

Whoever is to blame, Lumad mothers said they want to live peacefully and take care of their children and return home from evacuation camps.

Gertrudes Layal, 43, left her five children, ages 8 to 19, to join the Manilakbayan. "I just want to protest so that we can keep our ancestral land.

Mining companies want our land. They always promise development, they promise to give us jobs but they do not keep their promises," Layal said.

Pagalan, the Lumad mother from the village of Diatagon, left four children at home to join the protest.

"We want the government to be made accountable for the human rights violations and attacks," she said. "Mining companies promised too many things in the past but they did not deliver. We don't want to give up our land because money can be consumed but land will not perish."