Before Sunrise, After Dreams, In Between Travels 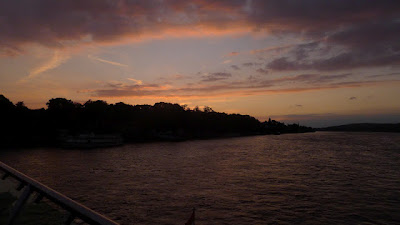 Before Sunset at 10 in the evening. Bonn, Germany. 2012
I have a Betamax copy of Before Sunrise. That's how old we are -- Jesse, Celine and I and the memories the movie holds.

I grew up with a lot of movies but Before Sunrise stuck because it came at a time when my younger self molded dreams of seeing the world and falling in love. Life held a lot of promises then. I dreamt of love, void of cynicism.

It came at a time when I had seen only a glimpse of Europe and longed to see more. By the time I saw the film, I had walked the cobblestone streets of Amsterdam and stared at Van Gogh's Starry, Starry Night up close.  I had lived in an old KGB apartment in Kazakhstan and fresh out of college, had experienced driving in the quiet streets of Guelph. I got lost, too in a building in Japan.

Yet, this was not enough. I longed to see more and the movie ignited in me this strong spirit of traveling. I wanted to see not just the beauty of charming Italian cities but the addicting strangeness of the foreign and the unfamiliar. I wanted to ride more trains and buses and to get lost along the way.

Before Sunrise awakened in my younger self this strong sense of adventure, of discovering things, of diving in moments that will never ever come back; of spontaneity. It brewed in me dreams of swept-off-your-feet kind of love, of romantic river cruises and visits to the South of France.

By the time Before Sunset came out in 2004, I had seen the sunset in Vienna and lounged at the the Shakespeare & Company Bookshop in Paris where Jesse launched his book.

But as Jesse and Celine struggled in their respective relationships, (he seemed to have hit the end of the road with his wife while she, on the other hand, was trying to work things out with her photographer boyfriend), I, too had struggled between broken hearts and vanished dreams; cynicism had set in and the reality that even the best of relationships don't work out, had wounded me badly.

Some dreams were blown away with the autumn leaves in New York; some vanished with the last passing train that left London's Russell Square.

In the years following that, I became a mother and in the truest sense of the word, a single mother, even if I never dreamt of becoming one.

Today, I'm still here, trying to survive the struggles and joys of motherhood; of being in a long-term relationship, of handling intimacy, mature love, the angriest of voices and the toughest irreconcilable differences one can imagine. There's also the harsh reality of domesticity and paying the bills. In short, I've come face to face with real life.

I have had less time for travel, too, replacing real life adventures with travelogues of Pico Iyer and Paul Theroux. I have had to shelve many dreams because reality intruded.

Yes, somehow, I've managed to squeeze some time to see more of the world and the places and memories continue to fill my heart -- I've knelt before monks in their orange robes in Luang Prabang, cruised the Rhine river with lots of love backlighted by the setting sun, strolled the streets of Qatar under the scorching April sun, went to the tea mountains of Java and enjoyed eleven kinds of beer in Brussels -- but the yearning to travel more is stronger than before. 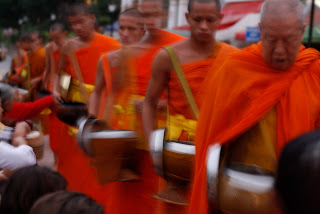 Perhaps, it's because of the fact that I can no longer just easily pack my bags and go.

I look forward to Before Midnight but hope that it wouldn't leave me waxing nostalgic about broken dreams and unfulfilled travels. I hope my younger self accepts where the older self is at now, struggling to survive in the rented shack that she lives in and dreaming of her next trip, perhaps right there in Jesse and Celine's Greece or to Istanbul (but knowing it will not be soon, if it happens at all).

But what I do hope most of all is for the younger self to accept that the older self has surrendered to the reality of love -- pain, bliss, surprises and all.

Posted by Iris Cecilia Gonzales at 7:39 AM