The Day the Cupcakes Fell 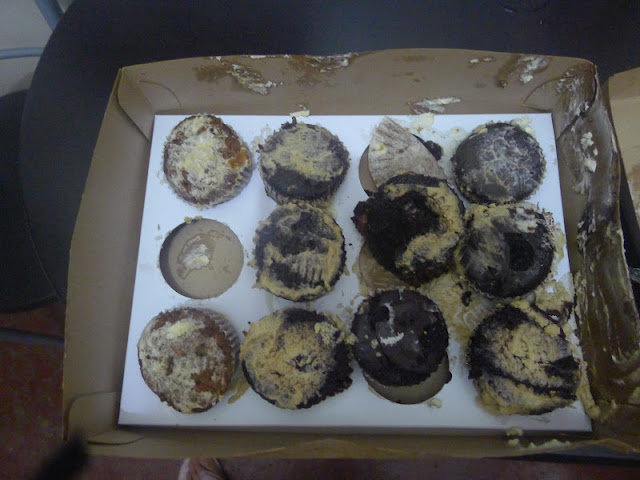 On the day a good friend died, someone sent me a box of freshly-baked cupcakes -- carrot, cappuccino and plain chocolate mini cakes.

It was an afternoon of errands, going from one bank to another as I scrape the barrel in search of funds to pay the bills.

I secured the cupcakes in the backseat of the car, making sure each cake would still be safe and sound by the time I get home.

It was perhaps the only conscious thing I was doing that day (I am always careful not to spill or let food just go to waste) because I was literally walking around numb. A good friend died that morning. I couldn't really think or move well but I needed to go to the banks because of past due checks I issued.

I met up with Jes later in the afternoon. He was also out doing some errands. I was excited to share with him the cupcakes.When he stepped inside the car, I volunteered: "No fights today...please?" I meant it to honor tsiong Ed, our dear friend who succumbed to a heart attack earlier in the day and the one person who unwittingly brought us together.

Not that we've been fighting a lot the past days but fights, like death, come like a thief in the night -- fast and furious and in a whopping surprise. Fights come in the least expected moments, in the happiest of hours. A fight can turn a cloud 9 into the darkest nimbus. It roars and explodes and by the time you realize what had happened, the disaster is worst than any hurricane or thunderstorm put together.

And so in honor of tsiong, I wanted to make sure. Thus, my preposition. Jes, the cool guy that he is, made me feel that there was no need for such a request. "Of course."

We went home after doing the errands. Upon reaching the gate to our tiny shack, I carefully carried the cupcakes to the table, walking slowly to make sure I wouldn't slip.

Jes went on to brew coffee for us, the perfect companion to our cupcakes. Oh what a good afternoon snack we would be having!

When I opened the box, I gasped as I saw that some of the icing had melted already. I wasted no time and put the cupcakes in my tiny fridge to cool the icing a bit. I went inside the room to wait.

He snaps and shouts. This is the sound of madness. A raging bull.

The brain tells me something bad had happened. I rush outside to see.

The box of perfect cupcakes is now a portrait of disaster -- one cake after another and melted icing spread all over as a painter does when he splatters his canvas with color.

The tempest brew in a fraction of a second and there was no stopping it. For a while there, in a tiny shack on a quiet afternoon, there was nothing but two people lashing against each other, voices reverberating to the high heavens. And a box of cupcakes all smashed up.

Up there, tiong Ed must be rolling over in belly-aching laughter.