Filipina journalist Angelica Carballo invites everyone to Padede, her photo exhibit on breastfeeding, which will run from September 1 to 6 at the Senate of the Philippines.  Let this be an inspiration and a great reminder to all mothers that breastfeeding -- a stark and telling metaphor for how motherhood works-- is a lifetime gift we can give to our children. 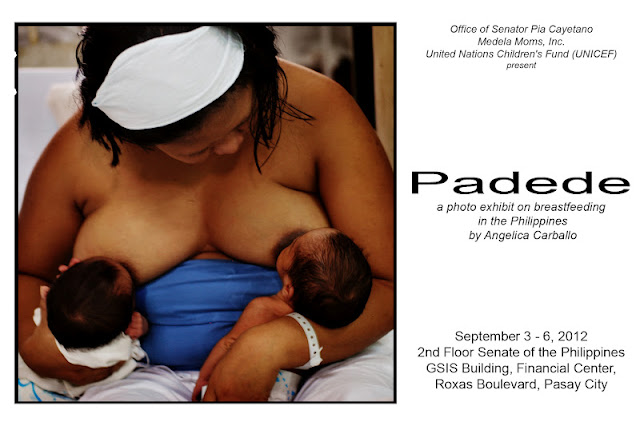 Below is the statement from Angel on her upcoming exhibit:

A photo documentary work on breastfeeding entitled Padede will be exhibited at the Senate of the Philippines Building, Roxas Boulevard, Pasay City on September 3-6, 2011, in partnership with the Office of Senator Pia Cayetano, Medela Moms Inc., and the United Nations Children's Fund (UNICEF).

Padede is a self-initiated, self-funded, non-profit work of photographer, writer, and mother Angelica Carballo that seeks to raise awareness about breastfeeding and create an inspiration for women that their body is enough to give her child the best start in life. At the same time, the project will also show the predicaments and hindrances that women encounter when breastfeeding her child, and how these social, economic, aesthetic, and personal factors make her lose her trust and confidence in her breast, and what she can do to counter these.

Padede is a visual argument on the positive effects of breastfeeding. It also aims to reopen the topic of breastfeeding among mothers, expectant mothers, and policy makers , particularly its benefits for mothers and children. The exhibit also seeks to remind our good legislators to support and promote breastfeeding through appropriate legislation.

Carballo started the project as a requirement to the Masterclass in Documentary Photography (MCDP) under the tutelage of documentary photographer and professor Alex Baluyut, where she was enrolled three months after giving birth to her youngest son. Carballo decided to pursue the topic after experiencing the joys of breastfeeding her children, Anna Katrina Leica, three years old, and Napoleon Boris, one year old.

At present, Carballo is a freelance writer and photographer who writes and documents stories on women’s rights, public health, education, and persons with disabilities (PWDs). She is a member of TALA Photo Collective, a group of Filipina women photojournalists; AKP Images, a group of young documentary photographers; and the Freelance Writers Guild of the Philippines (FWGP).