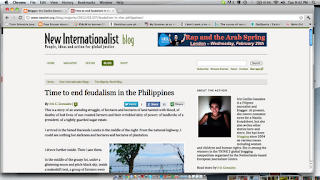 Time to end feudalism in the Philippines

3  31 Share
This is a story of an unending struggle; of hectares and hectares of land tainted with blood, of deaths; of lost lives; of sun-roasted farmers and their wrinkled skin; of power; of landlords; of a president; of a tightly guarded sugar estate.
I arrived in the famed Hacienda Luisita in the middle of the night. From the national highway, I could see nothing but darkness and hectares and hectares of plantation.

I drove further inside. Then I saw them.

In the middle of the grassy lot, under a glistening moon and pitch-black sky, inside a makeshift tent, a group of farmers were dancing and singing the night away. I could smell the strong stench of gin from afar. It was almost tangible, the excitement.

Music, laughter and cheers sliced into the silence of the night.

‘There’s reason to be happy this time,’ says Ka Lito, a 54-year-old peasant leader who looks twice his age with his wrinkled skin.

Ka Lito is one of generations of farmers at the Hacienda Luisita sugar estate in Tarlac, a province some 200 kilometres away from Manila.

Luisita, once hailed as Asia’s largest sugar plantation, is the ultimate symbol of the old feudal system in the Philippines.
On this giant patch of earth, farmers fighting for their land have been gunned down or snatched in the middle of the night, never to be seen again. Many of the planters have lost a loved one, a friend, a fellow worker to management’s hired goons.

One afternoon eight years ago, a barrage of bullets rained across the sugar estate, killing workers who were fighting for higher wages. It was 16 November 2004 when close to 15,000 farmers and mill workers gathered to fight for higher wages and better treatment.

Dispersal units in full battle-gear opened fire on the striking workers. There are varying reports on the number of deaths. Five. Seven. Fourteen. But the number does not matter. One death is too many.

Hacienda Luisita is a 6,500-hectare sugar plantation owned by the wealthy Cojuangco clan, which includes the late former President Corazon Aquino and her only son, incumbent President Benigno Aquino III, two presidents who promised to make the Philippines a better place ‘for the Filipino people’.

To this day, farmers are asserting their right to the land, saying that an agrarian reform law passed during the time of President Corazon Aquino mandated the distribution of agricultural land to farmer-tenants.

They cited various charges including graft and corruption. The impeachment proceedings are still ongoing.

Ka Lito said this decision gives the farmers a glimpse of hope.

There’s reason to be happy, he said.

But whether or not the Aquino-led government will implement the Supreme Court’s decision to finally distribute Hacienda Luisita to the farmers remains to be seen.

I write this on the 26th anniversary of the historic People Power Revolution, a peaceful revolution that toppled the late dictator Ferdinand Marcos.

I was in third grade then, oblivious to what was happening around me.

What was clear was that everyone was wrapped in euphoria. The adults around me were all hopeful and optimistic.

My mother, a mother of three very young children at the time and a government employee, went to EDSA, that major thoroughfare where the people gathered, to add her voice to the upheaval. Everyone wore yellow shirts and waved yellow ribbons, she said. Yellow became a symbol of democracy and hope at the time. It is the same colour used by Corazon Aquino, the housewife who opposed the Marcos dictatorship, as her standard colour.

My mother would tell me again and again, like a bedtime story, her EDSA story. How she tried to stay safe behind a green military tank while praying the rosary, amidst a sea of people. My mother, who never attended a rally her whole life before then and whose father-in-law worked as a lawyer for Marcos, mustered the courage to go there for the future of her children, she said.

Things would be better, she promised, as she echoed the promises of EDSA.

Twenty-six years later, there is a giant golden statue of the Virgin Mary on the roof of a church inEDSA built in memory of the peaceful revolution. Today, EDSA remains a major thoroughfare and the name of the bloodless uprising that happened 26 years ago. Nothing else.

The Philippines is still mired in deep poverty and the promises of that upheaval have yet to be fulfilled. Corruption in government is as entrenched as before, human rights abuses continue and the economy is still struggling.

And in a sugar estate named Luisita, where the grass is a shade of burnt yellow, farmers are still struggling for their land.
Posted by Iris Cecilia Gonzales at 5:37 AM