Notes from a Port 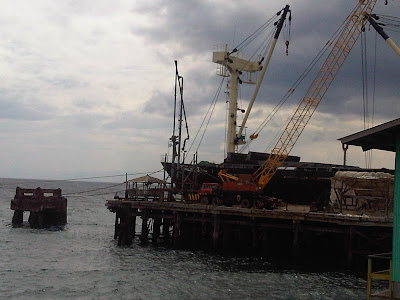 Under the scorching heat of the noonday sun, by the edge of the wooden planks of a small but bustling private port here in the outskirts of a Southern Philippine province, a man named Allan sits in exhaustion.
He is wearing a khaki long-sleeved shirt to protect his already roasted skin from the heat. A thick navy blue bonnet covers his head.
The port is in chaos. A hulking black cargo vessel from Japan has just docked. It is filled with 6,000 metric tons of ammonium sulfate, a type of inorganic salt used as raw material for agricultural fertilizer.
Allan and twenty other men are taking turns unloading the mountain of white-colored salt.  It will take two days to empty the vessel. There is barely time to rest. The giant cranes are working nonstop.
The men are scattered all over. Some operate the rusty ship-to-shore cranes. Others are in charge of the conveyor. The rest supervise the unloading.
As this is happening, with the sea breeze blowing in all directions, the smallest salt particles fill the air. It is luxury to be able to breathe in this condition but Allan and his fellow port workers are enduring the suffocating environment.
The vessel, after all, is only the second ship to arrive this month. When there is no ship, Allan and the rest of the gang are jobless.
They are after all contractual workers, at the beck and call of the company that hires them only when goods arrive.
“If there is no vessel, we don’t have a job,” Allan tells me, squinting his eyes as the glare of the sun becomes unbearable.
Allan says they don’t have much choice because with no educational attainment, they cannot easily find other jobs.
Port workers like Allan live with the harsh working conditions.
In this port, the dangers are clear and prevalent. One slip of the heavy towering cranes could lead to the deaths of many. A malfunction in the labyrinth of rusty metal machines can lead to a short circuit or worst, an explosion.
The air is filled with soot-like particles.
The pay isn’t good, too. They are given 160 pesos for eight hours or almost 4 dollars at the current exchange rate.
Those who have the skills and knowledge to operate the machines are given 550 pesos or roughly 12 dollars.
It’s a tough job but Allan and his fellow workers take it.

It’s the same old story in many other parts in the Philippines where laborers are exploited as desperate living conditions force them to settle for meager pay.
In economic zones all over the country, giant multinational firms are given five-year income tax holidays and the cost of labor is brought down as an incentive for them to set up shops in the country.
“You just have to get used to it,” Allan says. He wipes off some of the salt that now covers his wrinkled face and gets back to work. 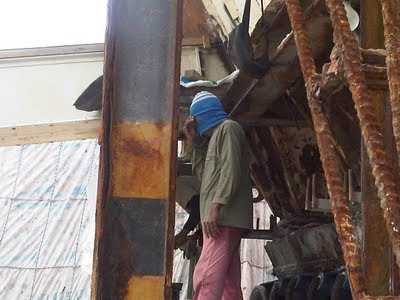 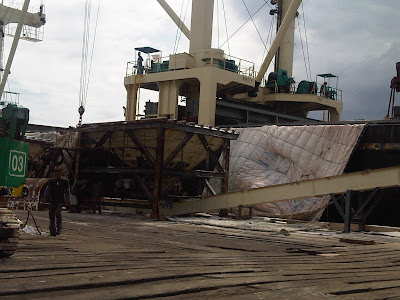