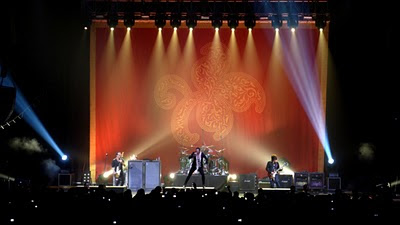 AS my eyes adjusted to the kaleidoscope of klieg lights and the screams and shouts of fans reverberated in the jampacked Araneta coliseum, I knew that no matter what I see or hear on stage, the night would be saved by nostalgia.

And indeed, it was.
There we were,  Jes and I, staring at the members of Stone Temple Pilots, the rock band of my high school years.
The lead vocalist of the American rock bank, Scott Weiland is old and could hardly – well -- how else do I call it? – hmm…could hardly “rock n roll.”
Jes, whom I had to drag to the concert with me (he tried to sell our tickets on his Facebook wall hours before the event in a desperate attempt to escape the whole thing) could not understand my screams of excitement.
But STP is STP and in my high school years, they were hard rock and grunge and nothing could ever change that.
I screamed and shouted as Scott mustered all the strength he could so that his vocal chords would sound STP.
And the music was still every bit STP to me. They still rocked, as they did during my highschool years.
As Kler said, the night was *powered by nostalgia. Good times indeed and not a second wasted.
As they say in Plush, “and I feel it…and I feel it.” Yep, I felt it in my veins.
(Photo by Jes Aznar)
Posted by Iris Cecilia Gonzales at 8:55 AM