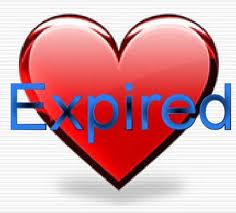 The bad news is love expires. The good news is so does pain.

What if people knew when love would expire? Like medicines,  fresh milk or cottage cheese. Or yoghurt.  Would we love more or hold back because loving would be futile anyway?

The best literary works and films have said so. Sometimes, so goes these stories, love simply flies out of the window, along with dreams of forever and promises of "til death do us part."

It happens. Boredom sets in. People outgrow each other. Or they simply get tired of all the fights, intense anger, hypocrisy, mistrust, paranoia and jealousy. The emotional, physical, verbal abuse and the immaturity. The domesticity, the chores, the never-ending financial problems, the mess, the perennial failure to put back the toilet seat, the perennial failure to be on time....the list goes on and on.

Sometimes, too love is replaced by pretense -- for the sake of the children, the in-laws, the parents, the bosses and the next door neighbor. Or the landlord. Or just because. There are couples who choose to pretend until they die. What would the neighbors say? Better to pretend than to eat shame for breakfast, pack up and start a new life.

And then there are the third parties. The third parties are often the last straw to break the camel's back. They are the mirrors that shout back and say that love has expired.

I wouldn't dream of the day that love will expire but I believe that defending a relationship when there is a third party is a lost battle. It's pointless. Your man either loves you or he doesn't love you anymore.

This is why I don't waste my time snooping on cell phones or emails. What's the point? My man either loves me or he loves somebody else. If he is in love with another, then I'm out. He's out. We're out. What's the point of fighting it out? Who wants to settle for expired love? Not me.

But if and when it does happen, one just has to trust the universe that everything will be alright. In time. Yes, pain expires too and simply disappears.

Jes and I once had a discussion about these third parties. I told him I'm not the type who would lift a finger to defend a lost cause. How can something be worth fighting for when the battle does not even exist? The best defense is to nurture the relationship so that love doesn't fly out of the window.

My take? Just love. Love and leave the fear and the baggage behind. (Oh and leave behind the hormones, too). Devote. Then surrender.

(Graphic art from http://blog.sweetestmemories.com/)
Posted by Iris Cecilia Gonzales at 6:46 AM